This teen’s body was ‘bending by the hour.’ His 18th surgery changed his life.

“I told myself that this can’t be happening,” Joanne said. “I’m putting two and two together, and I’m trying to get a hold of John. Nobody is answering my calls or texts, and I’m frantic, my mind is running.”

John, now 19, had been diagnosed at age 5 with what would become an extreme case of scoliosis and kyphosis. He’d already had 16 surgeries, with doctors placing metal implants along his spine to support his back as he grew.

When the 16-year-old finally came home after his mother noticed the bloody clothes, Joanne took him upstairs and calmly asked, “John, can you take off your shirt?” 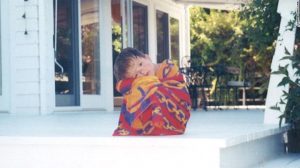 His mother decorated the brace with stickers and his classmates signed it with their names. But even in elementary school, John felt different. “I wouldn’t want to be around my friends with it on,” he said. “It was just so annoying.”

But for all its inconvenience, the brace did little to help John’s worsening spine. He needed surgery, doctors said, and he soon had the operation to insert the rods into his back. Every six months, John returned to the hospital to lengthen them as he grew. 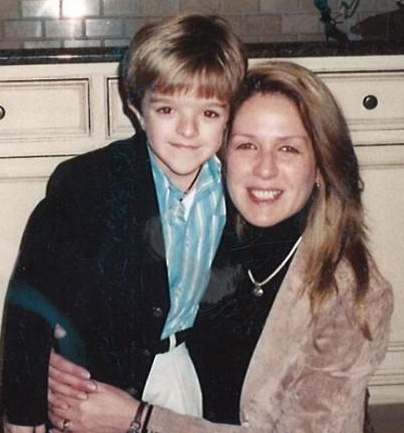 But after 17 operations, those rods were gone—and John’s condition was as bad as ever.

“It’s important to understand that surgery can do a lot,” said Dr. Jeffrey Wang, president of the North American Spine Society and co-director of the USC Spine Center. “But surgery can’t do everything. It’s not always the fault of the kid or the doctor or the patient if it fails.”

John’s surgeon, unable to treat him any further, recommended Dr. Lawrence Lenke, surgeon-in-chief at the Daniel and Jane Och Spine Hospital at NewYork-Presbyterian and a former president of the Scoliosis Research Society.

“Part of my practice is taking care of things that other people can’t take care of,” said Lenke. “Some surgeons, at some point, are not comfortable treating these conditions.”

John was “bending by the hour”

John’s condition continued to worsen after he returned home from his rod removal. When the family went to NewYork-Presbyterian a month later, Lenke said that John was “bending by the hour.”

John’s kyphosis, an outward curvature of his spine that hunched his back, was so severe that it impacted his breathing, leaving him with only 22% of his lung capacity when he arrived at NewYork-Presbyterian. “Walking through school, even from one end to the other, I’d be out of breath,” John remembered. “It was definitely a struggle.”

He needed surgery, but Lenke’s proposal was risky—a slight complication and John could have been paralyzed for life.
Called a vertebral column resection, Lenke would separate John’s spine into different sections, remove two vertebrae at the very center of the severe kyphosis, then straighten the spine as he brought the pieces back together.

“It does work well,” Lenke said, “but the issue is that we have to take the vertebrate out around the spinal cord, and that’s risky.” His mother was terrified, but John had few options.

“The risk of doing nothing was that her son was going to suffocate or die,” Lenke said, “and she could see that slowly happening.”

“We test electrical activity,” Lenke said, “and in the middle of taking a vertebrate out, the spinal cord activity went away.”

That isn’t unheard of—Lenke said it happens in about 30% of surgeries like John’s—but “for an hour, he was technically paralyzed.”

“The doctors were soaking wet in their scrubs from top to bottom,” said Joanne. “They were completely exhausted. They never stopped working, and they saved my son’s life.” 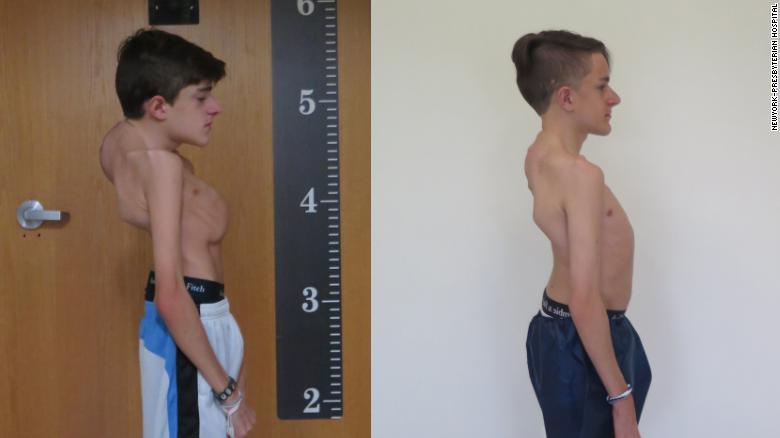 The top of John’s spine had been bent forward over 120 degrees before his surgery, making it difficult to stand straight up and perform daily tasks like walking up stairs.

“I was collapsing on myself,” John said. His operation was so drastic that it changed his body’s center of gravity.

“Those first steps, leaning up against the bed, I felt like I was in a new body,” John said. “It’s a pretty crazy feeling and I still remember it today. It was almost like learning how to walk again.”

It was his 18th surgery, but things felt different this time. “This might be a chance at a new life,” he remembers thinking. “I could feel myself getting stronger with each step.”

“I was just praying everyday for a miracle to happen, that I would be able to see my son graduate,” said Joanne. When it finally happened earlier this year, “it was a beautiful day,” she said.

John is now seven inches taller and regularly plays basketball and golf, activities that were unthinkable before his surgery. He’s learning how to drive, too, and is currently a student at Nassau Community College on Long Island.

He isn’t sure exactly what he wants to do when he graduates, but John dreams of being a doctor.

“Since I was helped as a child, I want to help children as they’re growing up and dealing with their own situations,” he said. And while he isn’t picking up the scalpel just yet, John has some advice for those who might be struggling like he did.

“If you just stay positive,” he said, “and work through and deal with the pain of the situation, if you can just get through that, then there are going to be brighter days.”