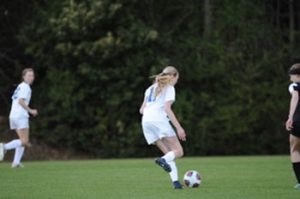 My daughter had her scoliosis surgery on November 7, 2017.  We were hopeful that she would be able to play some of her high school varsity soccer during the spring season, but knew it was unlikely she would be ready for the full season. Amazingly, she had the best season of soccer in her life.

It truly was amazing to see her released to conditioning at only 2 months post-op. She returned to play prior to her first game in the spring and was a stronger player than ever before. She’s played soccer since she was 8 years old, but this season she was more physical and stronger than any past season of soccer. She went on to be her team’s leading scorer, earning her the “Best Offensive Player” award and “All Region” award.

We can’t thank Dr. Lenke and his whole team for the exceptional care that she received.