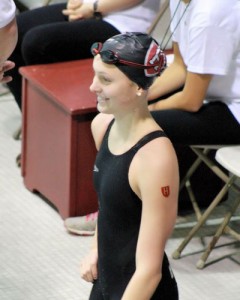 Today I went for my 2-year check-up and my spine looks great! Having scoliosis surgery was one of the best decisions I have made.

On 9/12/13, Dr. Lenke performed a spinal fusion from T4-T12. At that time my thoracic and lumbar curves measured 68 and 53 degrees. Post surgery, my thoracic curve was fixed at 20 degrees and the lumbar was still near 50. Today, the lumbar curve has corrected and stabilized at 25-30 degrees. I look and feel great and am so happy I had the surgery!

I was first diagnosed with a very mild thoracic curve in 5th grade at a routine nurse’s screening in school. After that, once a year I went for x-rays and through sophomore year of high school, my spine was stable. My orthopedic doctor was not concerned because I was 15 and thought it would probably remain stable.

The summer after my sophomore year, my spine really started to twist and my curves started progressing rapidly. By the fall of my junior year of high school, my back was so crooked that I was put in a brace that I wore 22 hours/day. While all my friends were wearing pretty clothes, I was wearing sweatshirts and baggy clothes. We really wanted to avoid surgery so I was given daily exercises, which were supposed to help realign my spine. I also saw a chiropractor in New York City for 4 hours every week.  He put me in traction to twist my spine into the correct position. At home, 3 times a day, I would put myself into the traction apparatus that had weights attached and I would stand on a vibrating platform for 20 minutes. I was waking up at 5:45 a.m. to start the daily routine. It was really awful. I continued this routine for 6 months. I was so unhappy because no matter what I tried, my curves just kept getting worse. It seemed that life would never be fun again. 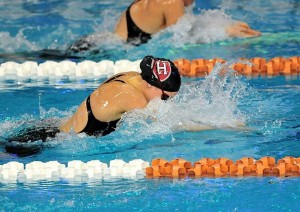 I am a competitive swimmer and after sophomore year, I had gotten fast enough, that many Division 1 schools were interested in talking to me. It was my dream to swim in college, but because of my scoliosis progressing, wearing a brace, traveling to NYC, doing traction exercises 3/day; I was not able to practice as much as I wanted. I thought my dream of swimming in college and being a normal teenage girl was over.

Fortunately, we found Dr. Lenke and flew out to St. Louis for a consultation. Dr. Lenke thought he could do a selective fusion and hoped I could return to swimming. He could not promise I would be as good, but I was very hopeful in his ability. Once I made the decision to have surgery, I never looked back.

Surgery went smoothly, but I remained in the hospital for 12 days because I developed an ileus from the pain medication. The stay in the hospital was not fun, but everyone there was really helpful and I just hoped that I would heal and be able to get back to my life.

Dr. Lenke told me that I could do whatever I wanted post-op as long as it didn’t cause too much pain. I used pain as my guide, and at 3 weeks after surgery, I was able to swim a few laps in our pool. I was the captain of my high school swim team so I really wanted to swim for my team at the state championships. I was a little afraid to dive off the starting block, but I tried a dive from the side of the pool and I didn’t have pain. At just 7 weeks after spine surgery I competed for the Greenwich High School team and placed 2nd in the state.

At the time I made the decision to go forward with spine surgery, I was being recruited to swim for Harvard. I called the swim coach and explained that I had scoliosis and it had progressed to a point where it would be dangerous to my long-term health and I needed to have my spine fused. She asked if there was a 50% chance I would be as good as I had been before. I said yes, because that was probably the right percentage chance. I was worried that she wouldn’t continue to recruit me, but knew I had made the right decision to go through with surgery.

I am happy to say that I was accepted to Harvard and have completed my freshman year. I was a member of the women’s swim team and have continued to improve. This season I did best times, competed in swim meets across the U.S. and hope to be even better next year. I no longer have to hide my body behind baggy sweatshirts and feel great wearing whatever I want. I am so thankful that I have my life back and feel very grateful to have found Dr. Lenke! And lucky for me, Dr. Lenke has moved to NYC so it’s now easier for me to see him for my postop appointments!

I really hope my story helps others decide to go through with surgery and feel confident that the best is yet to come!