“(Post-surgery,) Dr. Lenke expressed that there’s really not a lot of restriction. I’m starting to swing a golf club again, which is one of my passions; shoot hoops—play basketball with my friends. I did go to prom.

Going to NewYork-Presbyterian Hospital is easily the best thing that could’ve happened to me.”

Hear John’s story in his own words in the video below. 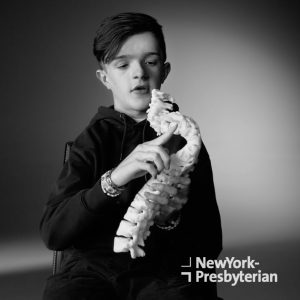 At just 16, John’s spine was so severely bent that it was literally crushing him to death. His internal organs were being pushed into each other, causing severe problems with breathing, heart function and digestion. John had already been through 17 surgeries and yet there was no solution in sight. Until John and his parents met Dr. Lawrence Lenke at the NewYork-Presbyterian Och Spine Hospital.

Dr. Lenke, a world renowned spine surgeon, proposed vertebral column resection (VCR) surgery, an extensive procedure that he helped develop. Basically, the idea was to remove two of the vertebrae in John’s spine—the ones that formed the “bend” of the curvature—and rejoin the two parts in a straighter configuration. The result was a complete transformation.

Today John can stand straight, his organs are in their proper place, and most importantly, he has resumed life as a normal teenager—including going to prom.