Bryce’s dramatic results—photos show Bryce’s back before and after spine surgery for scoliosis, by Dr. Lenke

When I was 13, during an annual physical, I was diagnosed with scoliosis at a 12 degree curve. The cause is unknown, but I have reason to believe it was from a fall I had suffered a few years prior to this discovery. I was immediately referred to an orthopedic specialist. From there he referred me to get a mold for a back brace to wear at night. The back cast was extremely tight, uncomfortable and stretched from my armpit to my mid-thigh on one side.

Six months later x-rays showed little to no improvement. The orthopedic doctor recommended a different type of brace that was even more uncomfortable than the first. This lasted six months or so. Not only was it not working, but the curve of my spine increased to 40 degrees. The reason my curve started rapidly increasing was because I was growing so fast at the age of 14-15.

On my 16th birthday, the doctor told me I should consider having surgery to fuse my spine and stop the progression. I was very uneasy about this idea, especially since I wasn’t done growing yet. The doctor referred me to see a neurosurgeon at Hershey Medical. I didn’t listen to him and decided to try alternative medicine, such as chiropractic care and therapy. Neither worked to stop my spine from increasing in degrees. The only thing they did was lower my pain level and make me feel more comfortable. Although feeling good is important, this does not help you out in the long-term.

Now I was 19 and started feeling extremely sore. Every morning when I would wake up, I would get pinched nerves constantly. I had finally decided to go see that neurosurgeon I was referred to. I went and didn’t meet with the doctor, but his physician’s assistant. They took x-rays, and said “Okay, we’ll see you in a year to see how this 54 degree curve changes.”

I was upset that they offered no help at the moment, but a year later, I went and visited them again. The second visit was exactly the same: the same assistant met with me and took x-rays, only this time my curve was 60 degrees. The curve was increasing consistently, and something had to be done. 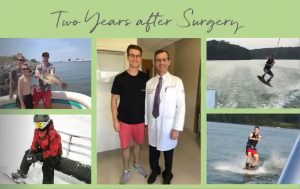 My mom and I started doing research on scoliosis doctors who are amazing, and this is when I first heard about Dr. Lenke. Dr. Lenke’s name kept coming up time after time—I finally decided to see if I could get an appointment with him. Within a few months, I had an appointment, and he sat down with me, looked over my x-rays and told me straight up, “You should have surgery.”

He said you can either do it now, when you’re young, or wait until you can’t stand the pain anymore, when you’re in your 40s. I said, “Let’s do it now.”

My curve was now 70 degrees, and I was done growing. I scheduled a time to have 12 vertebrae fused in my mid-back with two rods. The day before I was extremely calm—I knew I made the right choice with Dr. Lenke.

The surgery was a major success: my curve was hardly visible, and everything went according to plans. The next few days were the worst of my life, but I can promise you I’d endure the pain and have the surgery again if I had to.

Now, being a little over a full year later, I feel little to no pain in the morning, and I do everything I did before the surgery. Nothing holds me back—I rode a motorcycle three months after surgery, I’ve been to Killington Mountain snowboarding only seven months after surgery, league roller hockey and wake boarding ten months after. I could go on and on about activities I’ve done since, but the list would be too long.

I just want to say thanks, again, Dr. Lenke!

“We had an amazing team of doctors, nurses and staff taking care of Bryce. We were truly blessed to have them care for us.” –Bryce’s Mom